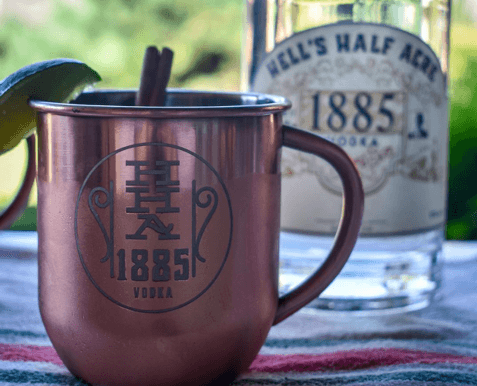 The following recipe makes around 1 cup of spiced syrup.

Bring water and sugar to a boil over medium-high heat, in a saucepan, until completely dissolved.

Add in cinnamon sticks and cloves.

Lower the heat, and cover the pan.

Let the mixture simmer for 10 minutes until it begins to caramelize and thicken.

Remove from heat, and allow the syrup for 30 minutes with the lid on.

Strain the syrup through a metal colander with large holes, removing the cinnamon stick and cloves.

Fill a copper Moscow Mule Mug or glass with ice.

Add in the vodka, apple cider, and spiced syrup.

Pour the Ginger Beer over the mixture.

Stir together, and then garnish with cinnamon sticks and jalepeño slices.

It’s the perfect seasonal treat for a feisty rebel.

Give your guests a Moscow Mule from Hell’s to light their fire this fall.